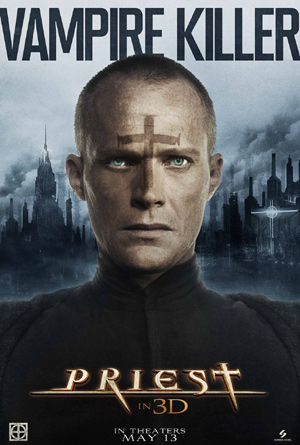 Oh, Priest. You had scary vampires. You had a woman of color, Maggie Q (Polish-Irish-Vietnamese), kicking ass. You had Karl Urban who was awesome in Red.

Why, oh why, did you have to be so terrible?

I really tried to work with you. I could get behind Paul Bettany as the main character, a vampire-slaying church soldier in the post-apocalypse. Your casting diversity was Maggie Q as another priest-warrior plus lots of background characters, but that’s further than many films get. Q’s character is great, she’s an equal partner in the ass-kicking and fighting vampires wouldn’t be the same without her. Plus, you had enough budget that the special effects didn’t grate on the eyes.

But what the hell was with the, um, “plot”? Was it screenwriter Cory Goodman? Or did he write a fantastic script that was butchered in the editing process? Did cutting it down to 87 minutes require removing all the parts that would make any of the following make sense:

And the… character development, I guess one could call it? Horrible. Clumsy. In the second half of the film, Maggie Q and Paul Bettany have one of the more heartbreaking, quiet, unrequited (?) love scenes I’ve witnessed in a movie. If only it hadn’t been preceded by a scene in the first half of the film where Q’s character appears and essentially throws up a bunch of personal confession that honestly would have been better as voiceover. (I never thought I would say something like that, but voiceover would actually have been BETTER.) These are extremely reserved people!

Unlike the town sheriff who could have added a Beavis-like “huh huh” after suddenly asking “So, can Priests have relations?” of someone he has known for approximately 6 seconds. Cam Gigandet, you need better people. You’re supposed to be the sidekick who proves himself, or something? Instead you’re just incompetent. And desperately lacking in both judgment and social skills.

This post could probably be infinitely long, because I have so much to lament about this movie. But I will limit myself to two more topics: the Damsel in Distress and the Ninja.

The Damsel in Distress is the young, skinny, pretty white girl whose kidnapping sparks all the action here. Thank goodness that young women living in frontier wastelands that are troubled by bandits grow up feisty, tough, and with formidable self-defense skills. Oh, wait…

The Ninja is played by Arnold Chon, and like Gigandet, he needs to fire his people immediately. Or, we need to fire most of Hollywood because they can’t stop portraying Asian martial artists as complete stereotypes. What is with the 20 second long fucking around with your ninjonics and your weapon thing and your kung-fu movie vocalizations? Did they keep recruiting Priests after the war, because honestly, I can’t see you living through the first five minutes of a confrontation with a vampire. Oh, wait…

Here’s what I have to say in Priest’s defense: It looks cool. And I laughed. A lot. Of course, that’s probably not the reaction they were hoping for.

I should probably give this 1 star for Typical because of the Ninja, and the redshirt problem with some of the Priests who are not played by Paul Bettany. But because of Maqqie Q, and the significant effort they made to cast Priests and Church leaders with some diversity, it feels more like “So Close.” Two stars.

p.s. To town sheriff, who is so pissed off that the Priest is going to kill the Damsel if she’s infected: What’s your plan? PENICILLIN?

9 thoughts on “Priest: I laughed, which probably wasn’t what they wanted”