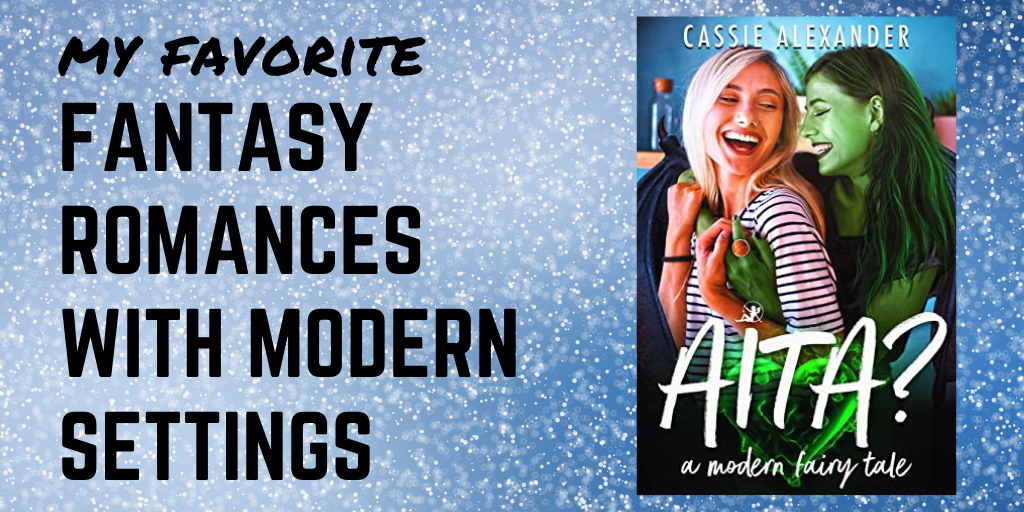 Before we jump in: 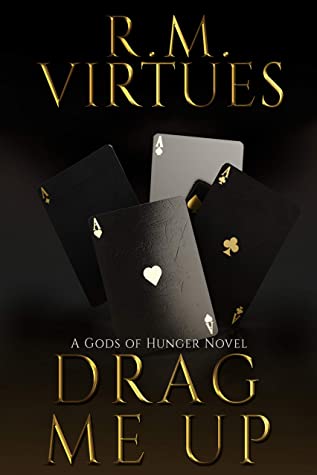 Drag Me Up by R.M. Virtues (Amazon / Goodreads)

“They say he’s a myth… And Hades prefers it that way. He may do all the work, and Zeus may get all the credit, but at least it allows Hades to preserve the one thing he truly cares to have: his solitude. The mere mention of the Wraith of Khaos Falls is enough to keep order, and he is rarely forced to leave the shadows of Casino Asphodel.

She belongs in the spotlight… And Persephone clawed her way out of Demeter’s shadow to reach it. Now she’s lead in Calliope’s Cirque production but not without great cost, and there is not enough money in the world to pay off the debt accrued for the simple mistake of trusting Zeus. Though it’s easier to ignore the bars when she still has room to fly.

Landing a residency at the legendary Casino Asphodel is everything she trained for. Meeting a man she’d been convinced didn’t exist? She could never be prepared for that. Hades isn’t prepared for her either, but it’s soon evident they’re a force when together. He gives her a soft place to land, and she makes him want to reach for the stars. But when Zeus ups the stakes, they must be willing to go all in, even if it means coming down from the sky. Or stepping into the light.” 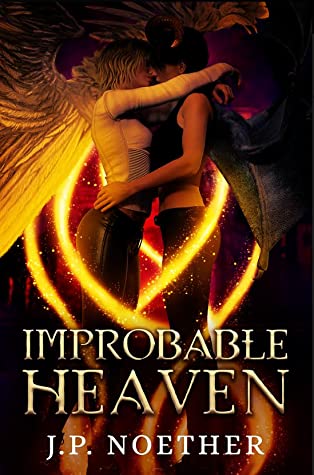 “Messenger angel Kel didn’t want an important assignment any more than her angelic superiors wanted to give it to her. She’s already lost the paperwork and taken an unauthorized shortcut when she falls into a trap that succubus scientist Alba has set on the demonic side of the hinterlands.

Kel’s spotty record can’t take that many more black marks. She negotiates for Alba’s silence: she’ll do anything the demon wants for thirty days. She’s read a book or two about succubi, and the prospect of a month of no-strings sex with Alba beats doing penance hands down. Even when Alba shatters Kel’s lurid hopes, assigning her to organize the library, it’s still better than going back to Heaven. For the first time in her existence, Kel finds out that she’s good at something, and Alba’s no-nonsense encouragement makes her want more than meaningless sex.

Unfortunately, Alba isn’t the only demon in Hell.” 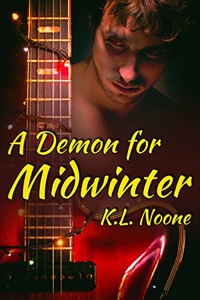 A Demon for Midwinter by K.L. Noone (JMS Books / Amazon / Goodreads)

I could not stop smiling while reading this M/M age gap rock star urban fantasy romance – and I was sick at the time! That’s how warm and fuzzy it is! It begins when Kris Starr, bisexual projective empath and washed-up rock singer, realizes with a start that he’s fallen in love with his manager, Justin Moore, who is the cutest and most adorable and kindest and Kris just wants to touch his hair and make him happy forever. This plan hits a snag when Kris finds out that Justin has a boyfriend. A jerk boyfriend. But when Justin’s biggest secret comes out, he turns to Kris for support. And Kris works so hard to be there for Justin! He has zero experience with a real relationship, but he asks friends for help when he doesn’t know something, and he properly prioritizes Justin’s needs over his own wants! It’s two people connecting who are huge fans of each other for all the right reasons. The world-building is also fascinating, a “contemporary” world so different from our own, where everyone has at least a little magic talent and the existence of parallel magical realms is a given.

Content warnings: Domestic violence, being outed in the press.

If you read it and like it, you should know there are three follow-up stories as well! Two are about Kris and Justin. The other, Lightning in a Bottle, is one of my FAVE short stories, though I don’t know how well it would work if you don’t already know Kris and Justin. A songwriter pining for the lead singer of his band, a little encouragement to share his feelings… so sweet! And the author’s note at the end that says it’s not an epilogue is one of my favorite epilogues in romance.

Diversity note: Noone is bi. 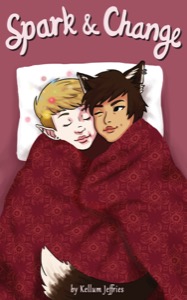 Cute novella about Frannie, a fae library student whose magic makes colored lights (want!) and Shirl, a shifter pharmacy tech, who meet and fall for each other… then have to work out some snarls. (Not shifter snarls! Logistics and prioritization snarls.) I’m always looking for more F/F romance, and this one was adorable. Shirl is understandably nervous about Frannie’s reaction to her shifting, given some of her previous relationship experiences. Frannie isn’t as thoughtful as she should be as the two fall into dating, and there are Consequences, and she must Make Amends. The magical society of alternate Richmond is intriguing. Derek, Shirl’s nonbinary roommate, needs more screen time in another story STAT. So here’s hoping this does well enough that Jeffries shares more stories with us. 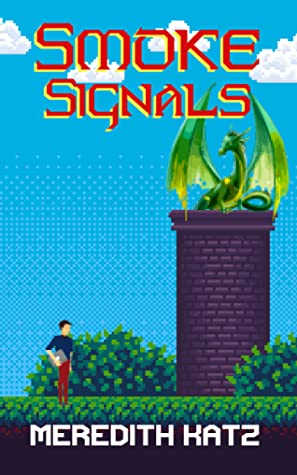 Super-nerdy M/M romance about a game company tech support guy and a dragon (yes, the dragon shapeshifts into human form.) A charming love story about learning how to communicate with someone who is very different from you.

“Mike St. George’s average life as tech support for a game distribution company becomes unexpectedly eventful when he’s sent to the home of an aristocratic, self-centered dragon and left in charge of installing and protecting the digital side of the dragon’s hoard of games.

But a job’s a job. And while the blue-blooded Zali’thurg might be egotistical and prideful, Mike’s wrangled worse customers. At least this one’s pretty cute, even if it’s in an apex predator sort of way…”

I don’t actually remember this happening so clearly? But his friends must have heard me—because a week later, they’d all pitched in to have a Delectably Demonic ™ summoning kit delivered to our house for him.

I want to put my foot down, but that would make him sad. I think he was really looking forward to it after I told him it’d be okay—and his friends really did spend a lot of money on this thing. It’s top of the line, and they can’t return it. You know how demons are.

And that’s the list of my favorite fantasy romance novels! Hope you found something interesting. If you have any reading suggestions, let me know, and as always, if you found this post helpful, please share it!