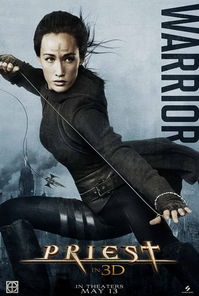 The “people won’t watch female action movies” myth on The Sounds of Distant Earth: girl powered music and film. New blog in our sphere, folks, so let’s give it some love. She does some interesting comparisons of box office numbers around Sucker Punch in this post.

Vampire reservations in Priest on Newspaper Rock: Where Native America Meets Pop Culture quotes someone identified as Ashley from a Facebook comment: “Well, what did the humans do in the movie? Wage war against the vampires, win, put the remaining vamps into reservations, and try to populate the land that the vamps had once ruled. That’s pretty blatant.” The blogger comments: “Also note that the tribe/reservation language seems to have been imposed by the filmmakers. It apparently wasn’t in the comics. Why the change? Because the filmmakers evidently associate deadly creatures with savage Indians.”

Thor: More Fun Than Expected on tinyheroes: “…they were cramming ‘three movies into one’ but there should have still been at least some emotional resonance with Thor’s personal discovery. Which was exactly what again? ‘Iron Man’ worked because you SAW the change in Stark.”

Get Hammered!: A Review of Thor by Zoe Chevat at The Mary Sue: “THOR boasts four main female speaking roles, two mortals and two shimmering immortals, a glut for the kind of movie where a token girl or older woman is usually all that can be expected.”

“Thor” Sexualizes Its Lead, Empowers its Female Characters on Zelda Lily: “At no point are there long, lingering shots of a braless Portman running through the rain, scrambling to cover herself up with a bedsheet or stripping off a layer of clothing while the male lead pretends to look away.”

‘Thor’ joke demonstrates how entrenched the male gaze is by Maryann Johanson on FlickFilosopher. (I cannot stand to read reviews ahead of seeing the films, but she also has a review of X-Men First Class up already and I think from the bit in the RSS feed that she loved it.)

Someone had requested a review of Fast Five in the comments, and I have to say, I was skeptical that it was worth 2 hours to see, an hour to review, and organizing babysitting to boot. But then I read Fast Five is the superheroes-assemble movie you’ve been waiting for (Sorry, Avengers) by Marc Bernardin at io9 and I’m kind of intrigued. Especially given info in the next link about Fast Five’s performance at the box office…

Counting Colored Cash at Ars Marginal. This is a smackdown to end all smackdowns, seriously.

How to Evaluate Disabled Characters in Pop Culture, for Nondisabled Viewers by s.e. smith on I Fry Mine in Butter.