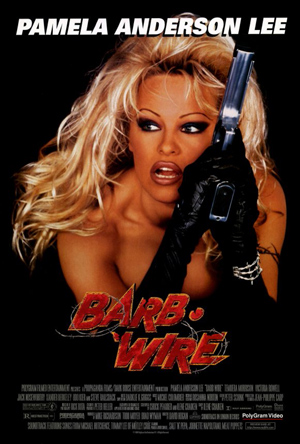 No, this isn’t an April Fool’s joke. I actually watched it.

If a DVD has a ten minute selection called “Sexy Outtakes” (presumably for those who thought the five minute half-naked Pamela Anderson music video at the beginning of the movie was not long enough), then I think we all know why it was made.

Strangely, though, I didn’t hate it as much as I thought I would. It gets no stars, ’cause it’s just so horrifyingly exploitative of Pamela Anderson’s body, which is really scary looking. I think I may have nightmares. However, Barb Wire the character is really quite competent. I would have been more impressed if her cover wasn’t always stripper or hooker, but see previous comment about exploitation.

Also, it produced a good conversation with my husband:

C-Man: I think I’d be annoyed with my boyfriend, if this is his idea of helping. Now I’m hanging from a crane over the ocean?

Me: On a car that’s stuck to a forklift. With a Nazi on it.

2 thoughts on “Barb Wire: Oh yes, I actually did watch it”