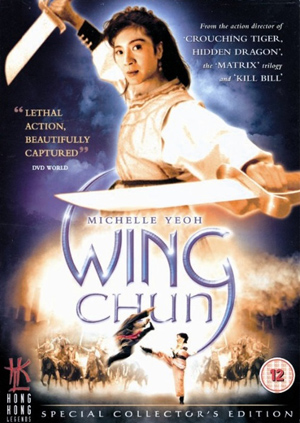 Trigger warning on this film for rape by deception and an attempted gang rape. It’s mentioned in the review but not discussed in detail.

I saw Wing Chun years ago in a theater in Austin. If I’d been asked to describe it from memory, I would have said something like “Michelle Yeoh totally kicks a bunch of guys’ backsides with her awesome kung fu.”

IF ONLY I HAD LEFT IT THAT WAY.

Michelle Yeoh does totally kick a bunch of ass with her awesome kung fu, but beyond that, this film is a big ol’ mess.

It starts out promisingly enough. Michelle plays the title character, Wing Chun, the former town beauty who took up kung fu and now defends the town from bandits as needed. Wearing men’s clothes. She lives with her aunt, an unmarried businesswoman, and her father. They operate the family tofu shop. When a young widow named Charmy is being married off to the highest bidder to pay for her late husband’s funeral, Wing Chun and her aunt take the girl in. So far, so good. Two strong, independent women watching out for a younger woman. But then the skeevy “scholar” who wanted to marry Wing Chun so he could get free bandit protection instead sets his sights on Charmy, and Wing Chun’s childhood sweetheart returns to town to marry her only to mistake Charmy for her…

You see how this could go downhill, don’t you?

Like Red Sonja, Wing Chun got backstabbed by her own film. For a while, it looked like she was going to come out ahead. She spends most of the film being true to herself, despite being relentlessly insulted by the local men. They benefit from her protection, but why let that get in the way of a good misogynist resentment? They accuse her of lusting after Charmy (hello, projecting much?) and even show up at the tofu shop to take Wing Chun down a peg. When the local bandit threatens that she’ll have to marry him if she loses a fight, the crowd laughs at her. If she’s going to be humiliated, they’ll probably bring popcorn.

None of this seems to matter to Wing Chun, though! She has power, she has a business to help run, and she likes to win her fights. Go Wing Chun!

Until her old boyfriend shows up. I was really hoping she would let him continue to think that Charmy was her, because then Wing Chun could have kept on with her awesomeness. Instead, the filmmakers sell her out! Damn you, filmmakers! He figures out the mistaken identity, pledges his affection for her even though two days ago he didn’t even recognize her and knows nothing about her current personality, and they hook up again. And she starts wearing pink. Argh! It even sounded like they subbed out a voice actor, or else Michelle Yeoh does sweet and girly way better than I suspected.

Her kung fu master, a woman, apparently missed the memo on women’s self-determination. “No matter how strong you are, you still have to settle down. You’re secular,” she says, “Go get married.” To a man who peeks in windows when women are getting undressed. He’s also more than willing to have Wing Chun fight the climactic battle with the bandits, but after that? “Be gentler” he says when she jumps onto a horse. And she apologizes.

Wing Chun, I am so sorry.

I also started off hopeful for the character of her aunt. Early in the film, she and Wing Chun struck me as two strong, nonconforming women. Auntie likes money more than men, and she’s not averse to negotiation, intimidation, and outright scheming to get the upper hand. Except that she’s also happy to use Charmy as the sex appeal to sell more tofu. And when the possibility is suggested that Charmy may be raped by her bandit kidnappers, Auntie says “She’s not a virgin anyway, what difference does it make?” I didn’t expect a cash-obsessed future tycoon to have the same honor her niece does, but when she’s throwing other women under the bus, I’m about done.

She also pretends to be Charmy in a successful plot to seduce the scholar. The fact that he doesn’t mind when he finds out, because he realizes he’ll get her money if he marries her, doesn’t make this any less of a rape. The whole thing is played for laughs, which is totally not okay.

Wing Chun’s childhood sweetie is supposed to be a good guy, but he’s not. In addition to the privacy violations and inability to recognize the woman he claims to love, he’s more than happy to accuse various women of bad behavior without any evidence. The scholar is without any moral fiber. The bandits are, obviously, bad guys. I can tell the filmmakers were going for “romantic mixup comedy” but isn’t there a way to do that without all of the men acting like assholes?

The problem with assessing films from another country or culture is that I lack context. It may be that this film actually shattered gender stereotypes for the time and place it was made. In 1994. Maybe? Were they actually trying to say that it’s so great Wing Chun’s boyfriend will still marry her even though she has better kung fu? Oh, wait, that’s not a good message either.

5 thoughts on “Wing Chun: Why, oh why did I watch this movie again?”

Logo and photo watermark by Life as the Artist.